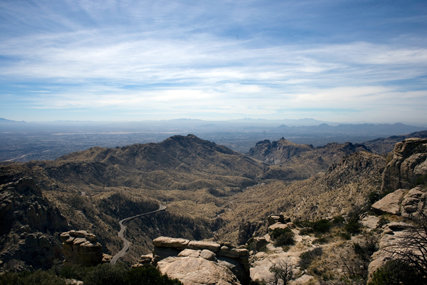 Your day breaks, your mind aches for something stimulating to match the stirrings of the season. The gate at the urban edge is open, here to the Santa Catalina Mountains, and yet you turn inward, to pixels and particle-board vistas.
Somethings amiss. A third of all American adults  check, it just went up to 35.7 percent  are obese. The French dont even have a word for fat, Paul Rudnick mused in a mock-Parisian tone in The New Yorker last week. If a woman is obese, he wrote, we simply call her American.
And, of course, our national branding comes with a host of deadly side effects: heart disease, stroke, Type 2 diabetes, certain kinds of cancer. Medical costs associated with obesity and inactivity are nearly $150 billion a year.
This grim toll is well known. Cripes: maybe surgery is the answer, or a menu of energy drinks and vodka (the Ann Coulter diet?). Count the calories. Lay off the muffins. Atkins one week, Slim-Fast the next. We spend more than $50 billion on the diet-industrial complex and have little to show for it (or too much).
But there is an obvious solution  just outside the window. For most of human history, people chased things or were chased themselves. They turned dirt over and planted seeds and saplings. They took in Vitamin D from the sun, and learned to tell a crow from a raven (ravens are larger; crows have a more nasal call; so say the birders). And then, in less than a generations time, millions of people completely decoupled themselves from nature.
Theres a term for the consequences of this divorce between human and habitat  nature deficit disorder, coined by the writer Richard Louv in a 2005 book, Last Child in the Woods. It sounds trendy, a bit of sociological shorthand, but give the man and his point a listen.
Louv argued that certain behavioral problems could be caused by the sharp decline in how little time children now spend outdoors, a trend updated in the latest Recreation Participation Report. The number of boys ages 6 to 12 who engage in some kind of outdoor activity, in particular, continues to slide.
Kids who do play outside are less likely to get sick, to be stressed or become aggressive, and are more adaptable to lifes unpredictable turns, Louv said. Since his book came out, things have gotten worse.
The average young people now spends practically every minute  except for the time in school  using a smartphone, computer, television or electronic device, my colleague Tamar Lewin reported in 2010, from a Kaiser Family Foundation study.
You can blame technology, but behind every screen-dominant upbringing is an overly cautious parent. Understandably, we want to protect our kids from out there variables. But its better not just to play in dirt, but to eat it. Studies show exposure to the randomness of nature may actually boost the immune system.
Nature may eventually come to those who shun it, and not in a pretty way. We stay indoors. We burn fossil fuels. The CO2 buildup adds to global warming. Suburbs of Denver are aflame this week, and much of the United States is getting ready for the tantrums of hurricane and tornado season, boosted by atmospheric instability.
Last week, an Australian mountaineer named Lincoln Hall died at the age of 56, and in the drama of that life cut short is a parable of sorts. Hall is best known for surviving a night at more than 28,000 feet on Mount Everest, in 2006. Hed become disoriented near the summit, and couldnt move  to the peril of his sherpas. They left him for dead. And Halls death was announced to his family.
But the next day, a group of climbers found Hall sitting up, jacket unzipped, mumbling, badly frostbitten  but alive. He later wrote a book, Dead Lucky: Life After Death on Mount Everest.
Still, having survived perhaps the most inhospitable, dangerous and life-killing perch on the planet, Hall died in middle age of a human-caused malady from urban life  mesothelioma, attributed to childhood exposure to asbestos.
Various groups, from the outdoor co-op REI to the Trust for Public Land, have have been working to ensure that kids have more contact with the alpine world than one lined with asbestos. And they dont even have to haul children off to a distant mountain to get some benefit. An urban park would do.
This week, Michelle Obama appeared in the glow of springs optimism to kick off the fourth year of the White House Kitchen Garden, a component of her campaign to curb childhood obesity. If she is successful, it will be because people learned by their own initiative  perhaps at her prompting. A worm at work can be a wonderful discovery if youve never seen one outside of a flat-screen. But so are endorphins, the narcotic byproduct of exercise.
Hope is the thing with feathers, wrote Emily Dickinson. The First Lady supplied her own variation on the theme, with two powerful words that can go a long way to battling nature deficit disorder: Lets plant!