Fast vs. far: The real benefits of interval running

Fast vs. far: The real benefits of interval running 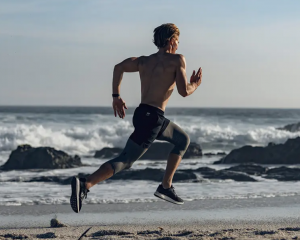 Not meeting your goals? You probably haven’t tried interval running yet.

Running doesn’t have to always be about logging as many miles as possible. More and more people are discovering the real benefits of interval training and are making the switch from running far to running fast.

What is interval running?

Interval training doesn’t necessarily mean running at the highest intensity possible. It simply describes a sequence of predefined distances or lengths of time to be run, broken up by recovery breaks in between. Depending on the goal and speed of the intervals, the breaks will either be used to recover or to continue running at a slower pace.

Why is interval running so effective?

This type of running doesn’t just increase performance and speed, and definitely isn’t just for racers or professionals. It also promotes weight loss – when done properly, running intervals can burn up to three times as many calories than a comfortable distance run, even if the total time spent running is the same.

Because of the fast segments, the body is burning more energy, as it now has to move the same mass but at a higher speed. The fast-twitch muscle fibers also come into play during short, fast sprints. These burn a higher amount of energy than the other muscle fibers because they work explosively. This also means that they cannot keep up the work for very long before they need to recover and more energy needs to be collected for the next round.

If that wasn’t enough, interval training also triggers the afterburn effect which is very much higher after intensive interval runs than after a normal distance run. The afterburn effect after a comfortable distance run is usually almost zero, but after an intense interval workout, it can last for up to 48 hours after training has been completed. This means that the body is still working on (and benefitting from) the training up to two days later.

The body adapts quickly and will get used to continuous stress in the form of training, such as distance running. This means that the effect will become less and less prominent with time. Without variety and new challenges, the body will reach a plateau in its progress and performance. To enhance the cardiovascular system and metabolism, there have to be new challenges incorporated into training. And interval running is the perfect way to achieve this. Fast intervals enhance the body’s maximum oxygen absorption, oxygen transportation (heart), oxygen capacity (lungs), and oxygen utilization (cells). The metabolism is also optimized and energy is used more efficiently within the body. Combined, this increases performance considerably, allowing you to run faster and further for longer.

Who is interval running for?

Anyone can run intervals – they are the ideal way to get into running as you’re far less likely to get bored. But intensity is key. You should always build up a basic level of endurance before taking on fast intervals.

Even if running 3k in one go is too much for a beginner, running and walking alternately for 6k is usually possible. This type of running is also perfect for running with friends, as there is plenty of time for talking, so you don’t have to go it alone.

At the right intensity, interval running is suitable for everyone. Interval training can be tailored to any individual and their goals and needs, which is exactly what the Running Coach does. The science shows that it’s the most effective way to run and will get you to your goals faster, helping you to enjoy running more along the way.