Warriors Give Back to Ru Yi Home

Warriors Give Back to Ru Yi Home

The idea of setting up a charity program to give back to the community came up one day over a breakfast conversation in Sri Ananda Bahwan after beach bootcamp. A few of us are first timers when it comes to this but have always wanted to start somewhere, just… not to sure where and how. So when the suggestion came up to implement and execute the idea, most, if not all, jumped into the bandwagon to work together to get this going. A working committee was instantly formed right there and then, a private Whatsapp group conversation was created and everyone got to work.
For the first project, we decided to go with something easier, which was to visit Ru Yi Children’s Home in  Mount Erskine, Tanjung Tokong. A call was made to the home to arrange the date and time of the visit. Responsibilities were delegated, Facebook pages created and members helped to spread the word. Donations were pouring in and there were even those who volunteered to buy all types of stationery and learning materials for the kids.
At approximately 4.15pm on 27th April which was a beautiful Sunday afternoon, we gathered at Ru Yi Home. 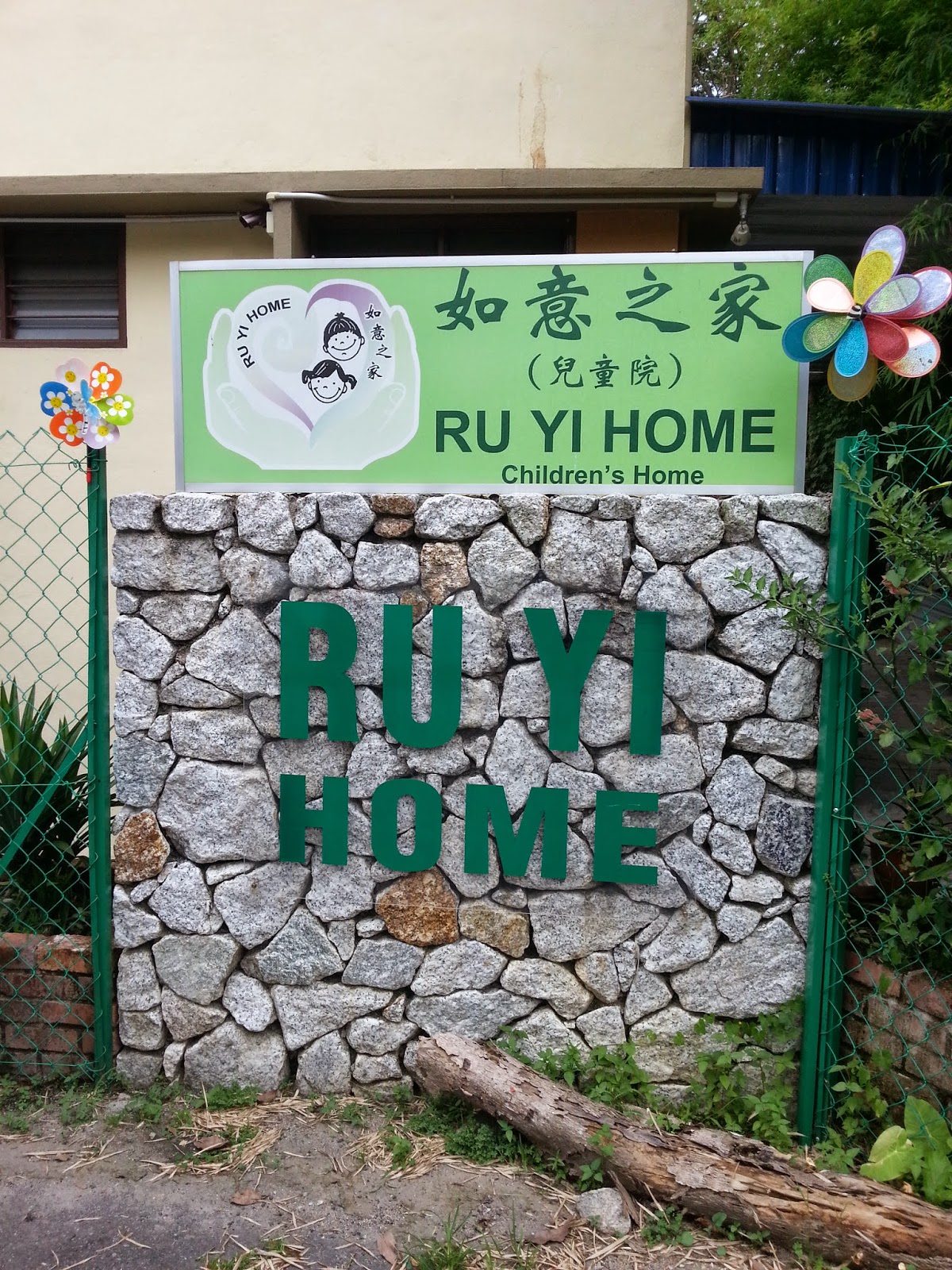 The kids were doing their homework when we arrived and we took a moment or two to blend in and talk to them. Surprisingly the kids were very friendly, outgoing, and well.. active.. which we soon found out later. 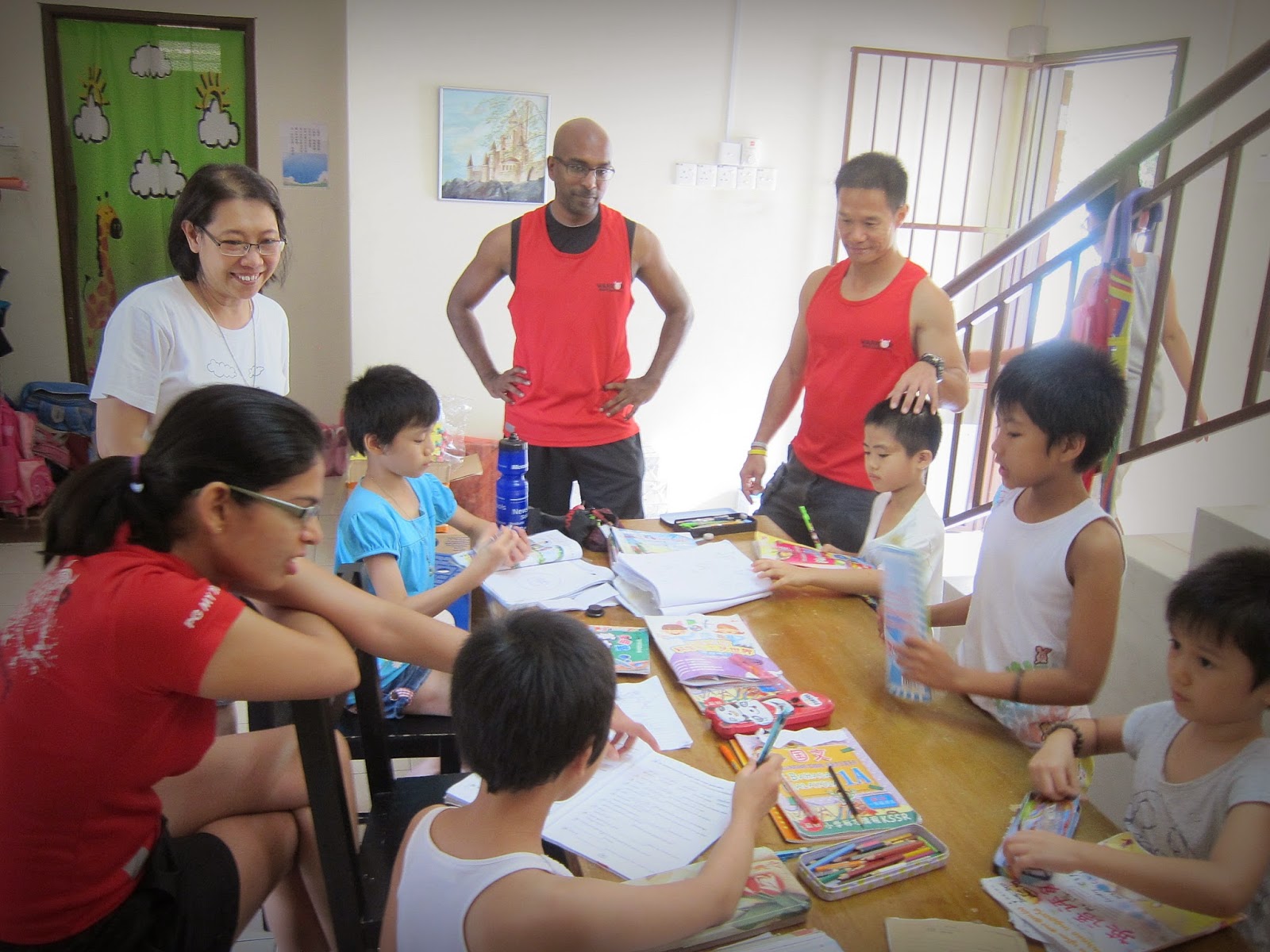 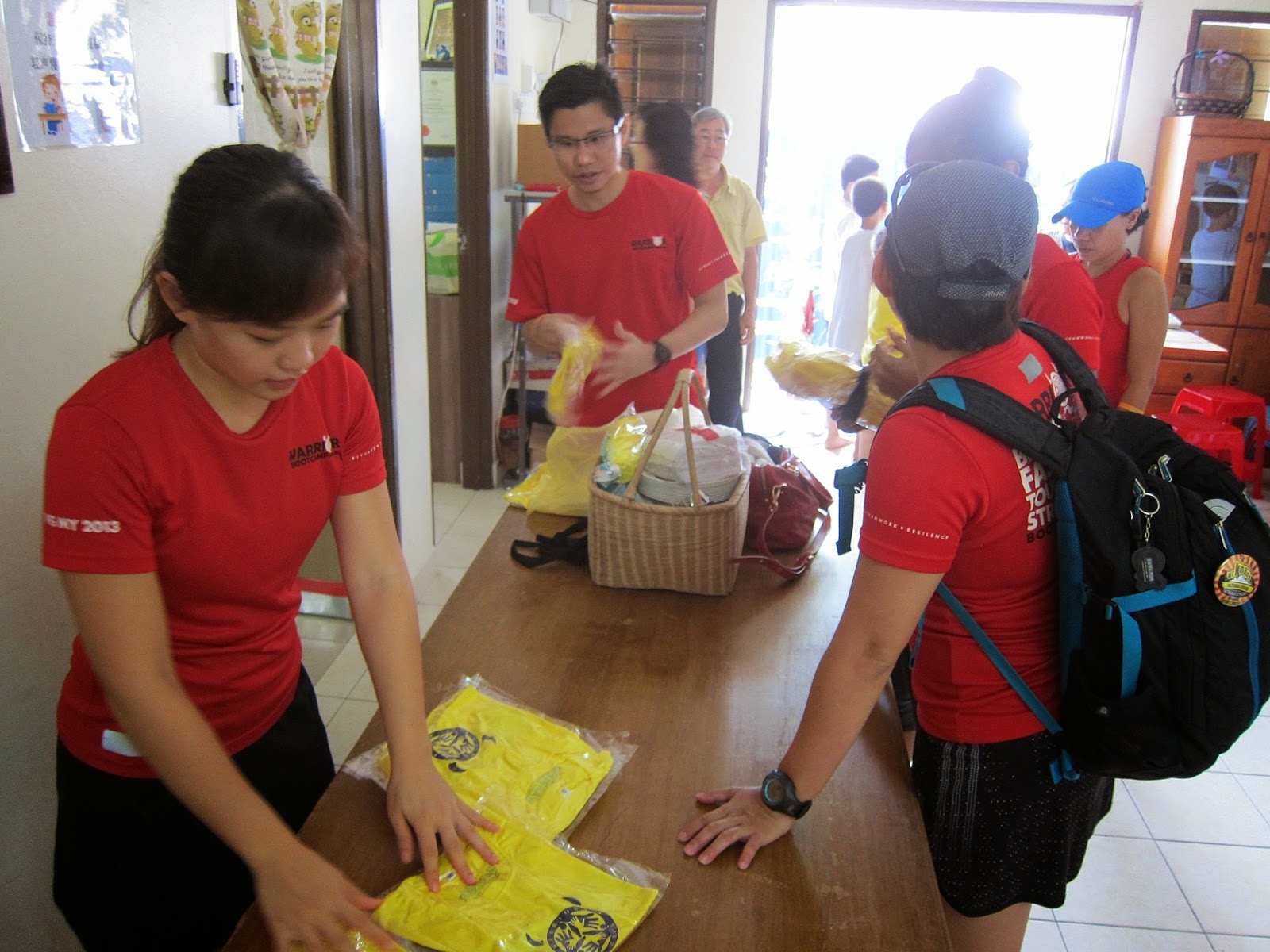 All of them queuing up for T shirt distribution. 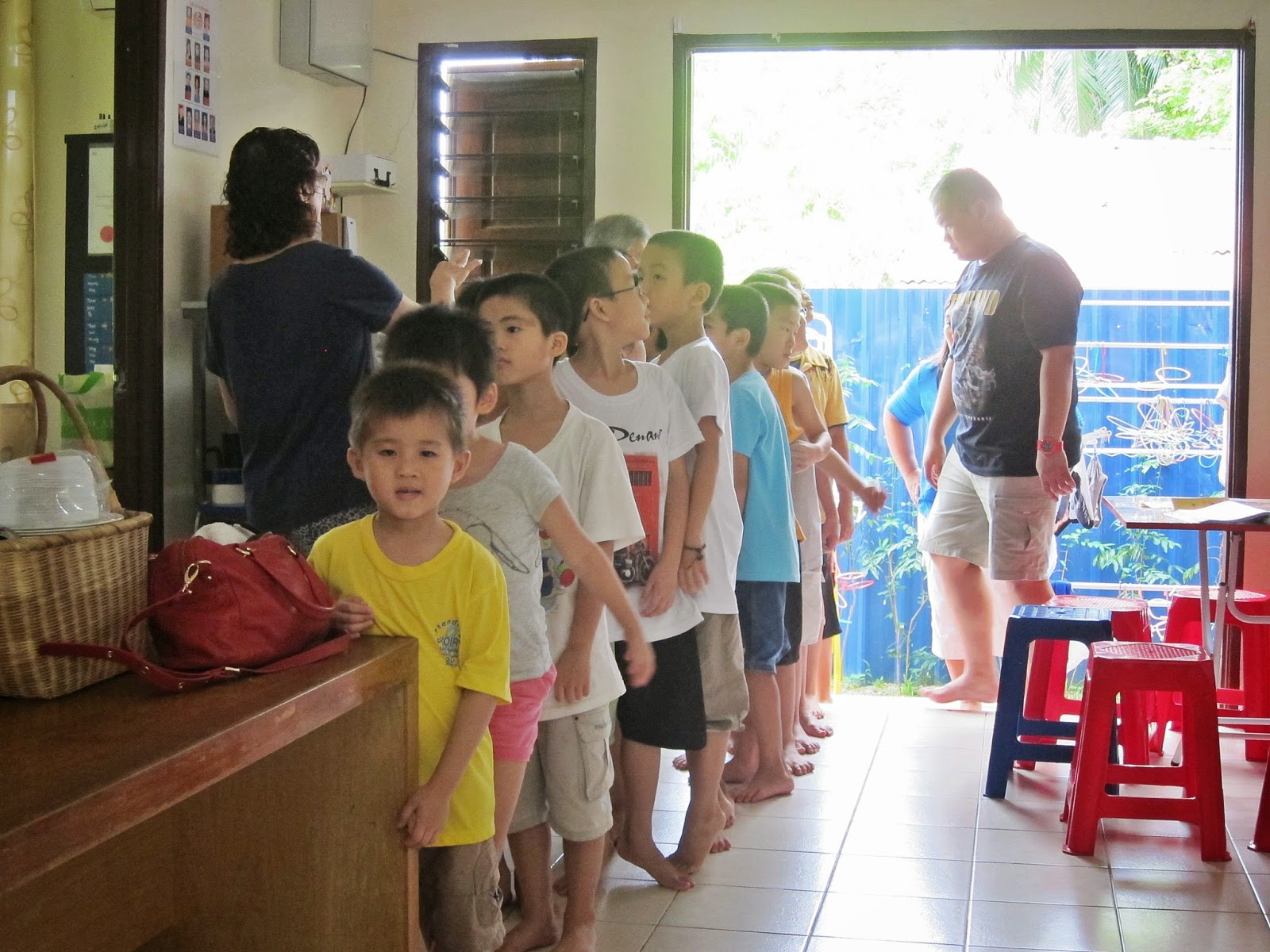 I have to say, all of them looked great and adorable in the T shirts! 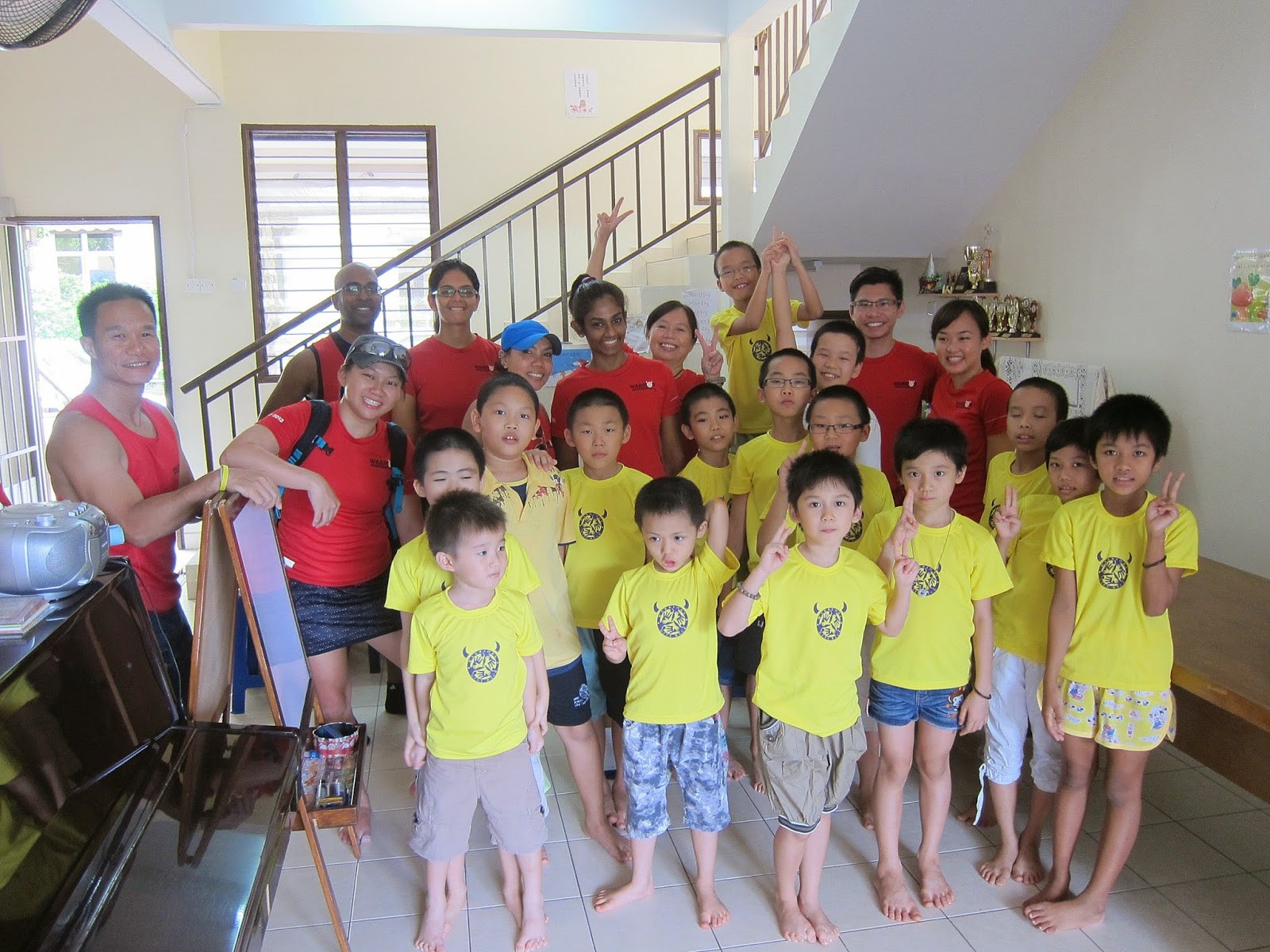 Next, we had them walking two by two in a line again and we walked up to an open hall area where the games were to be conducted. 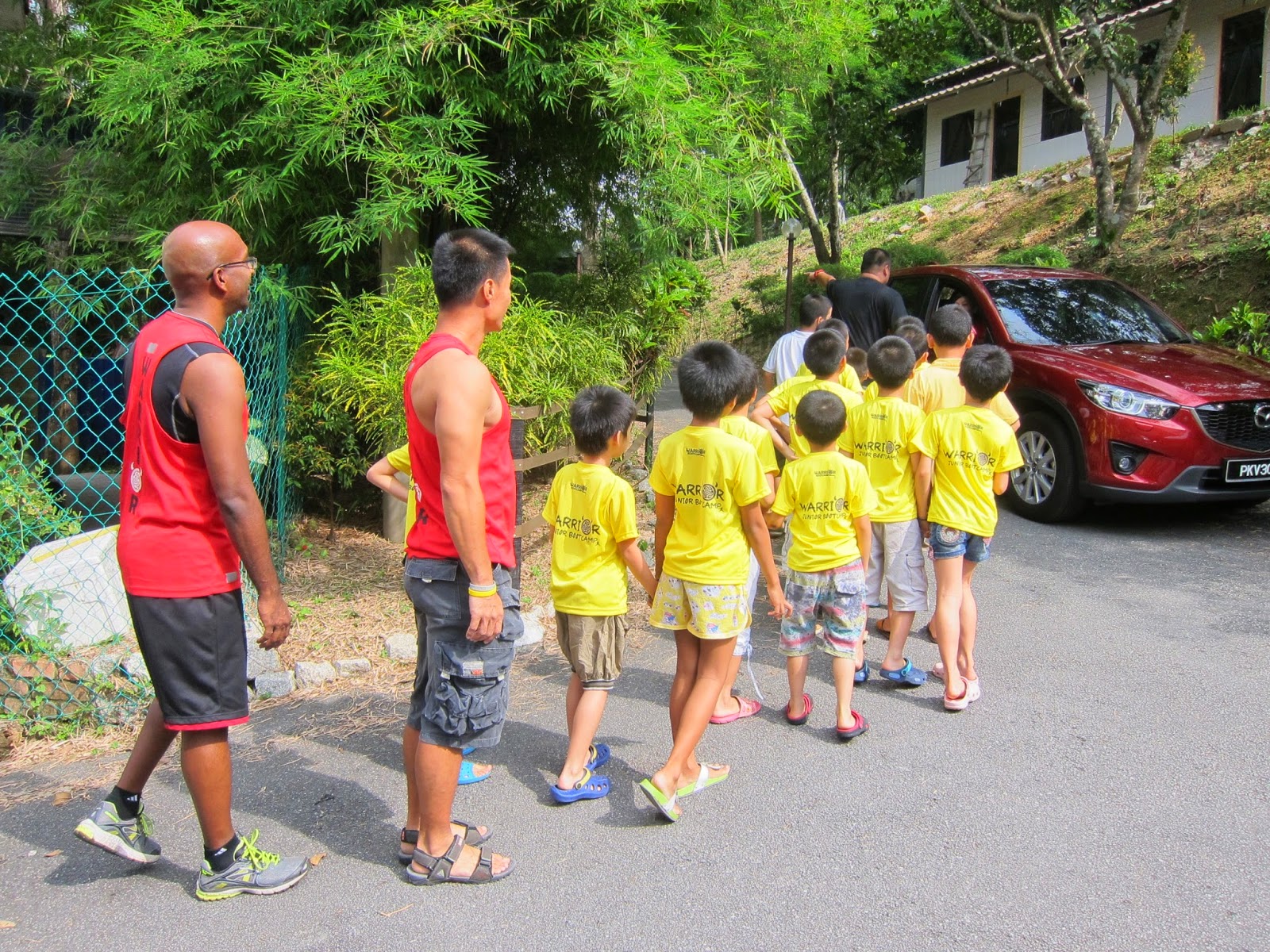 They were really active, talkative and excited that it took us a while to speak over all the commotion before we finally got them to listen. As most of the kids speak Mandarin, Kelvin took over as the lead translator for the group by explaining to the kids what Warrior Bootcamp is all about and our program for the day. Needless to say, they were more than eager to start with the games than anything else. 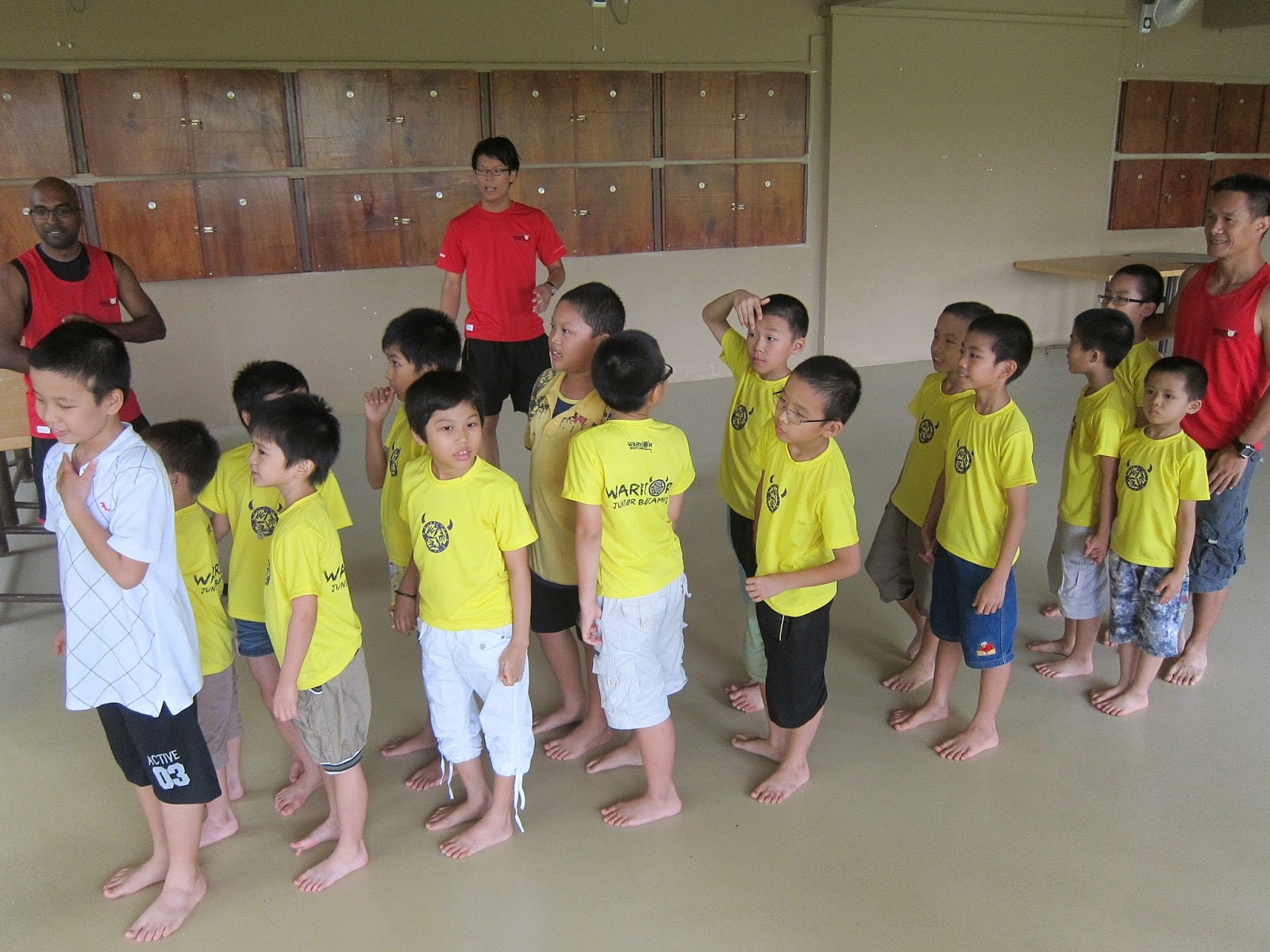 The rest of the volunteers joined in the warm up. 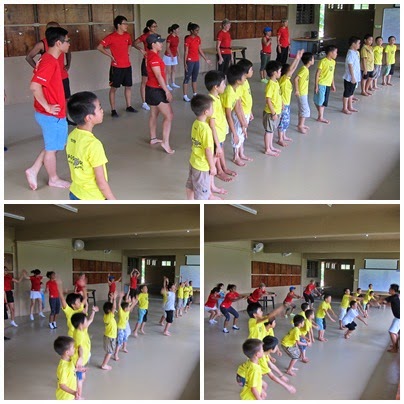 Luke had those kids doing a few agility movements such as duck walking, hopping on single leg and pushups. 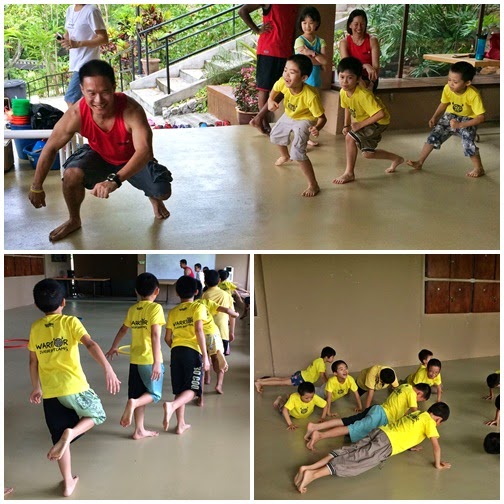 The first game, Duck, Duck, Duck, Goose started…the kids had played a different version before but this time they had to chant in English where some of them got a little confused. 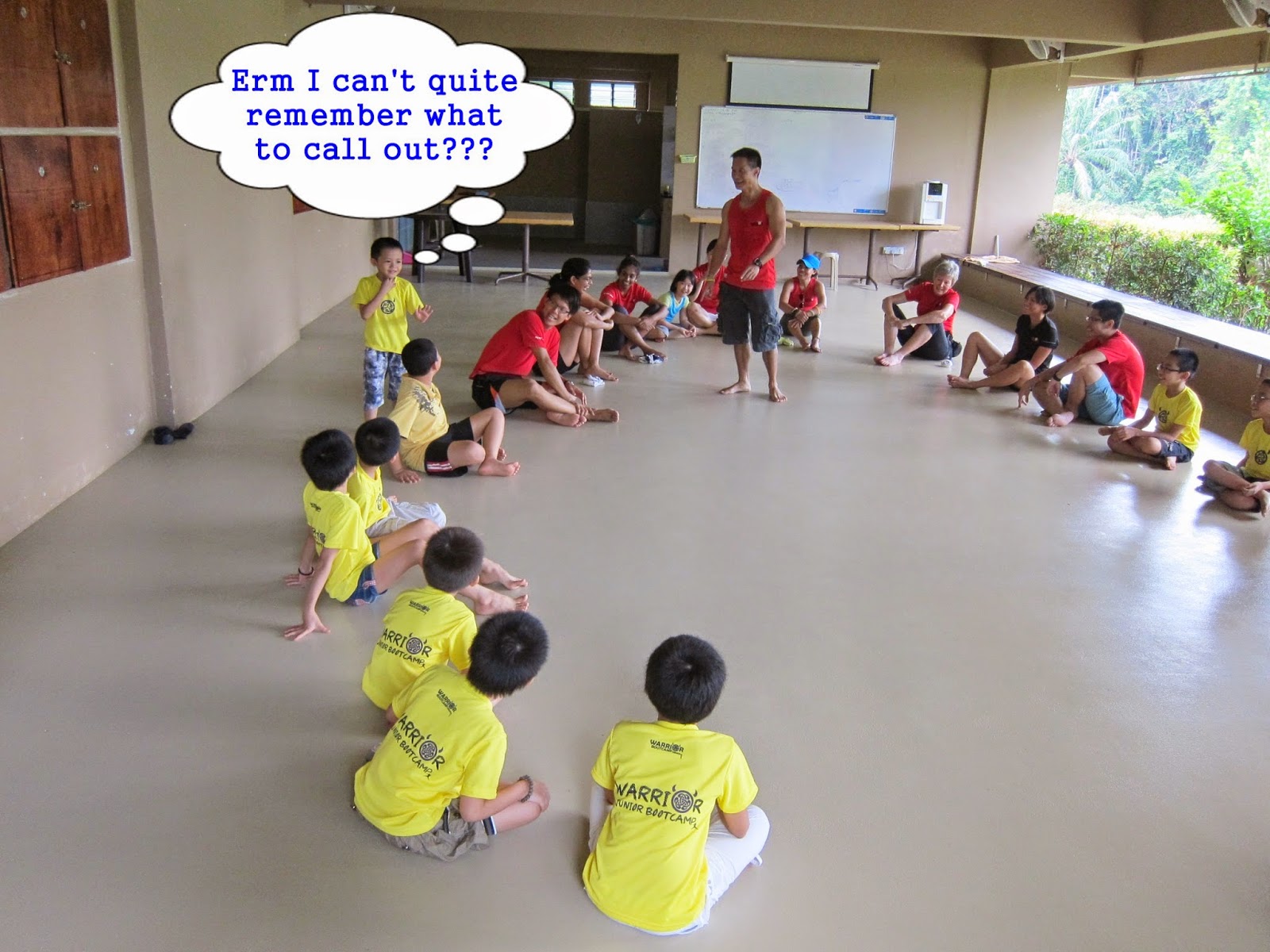 But when they did remember, boy oh boy, those kids can really sprint! 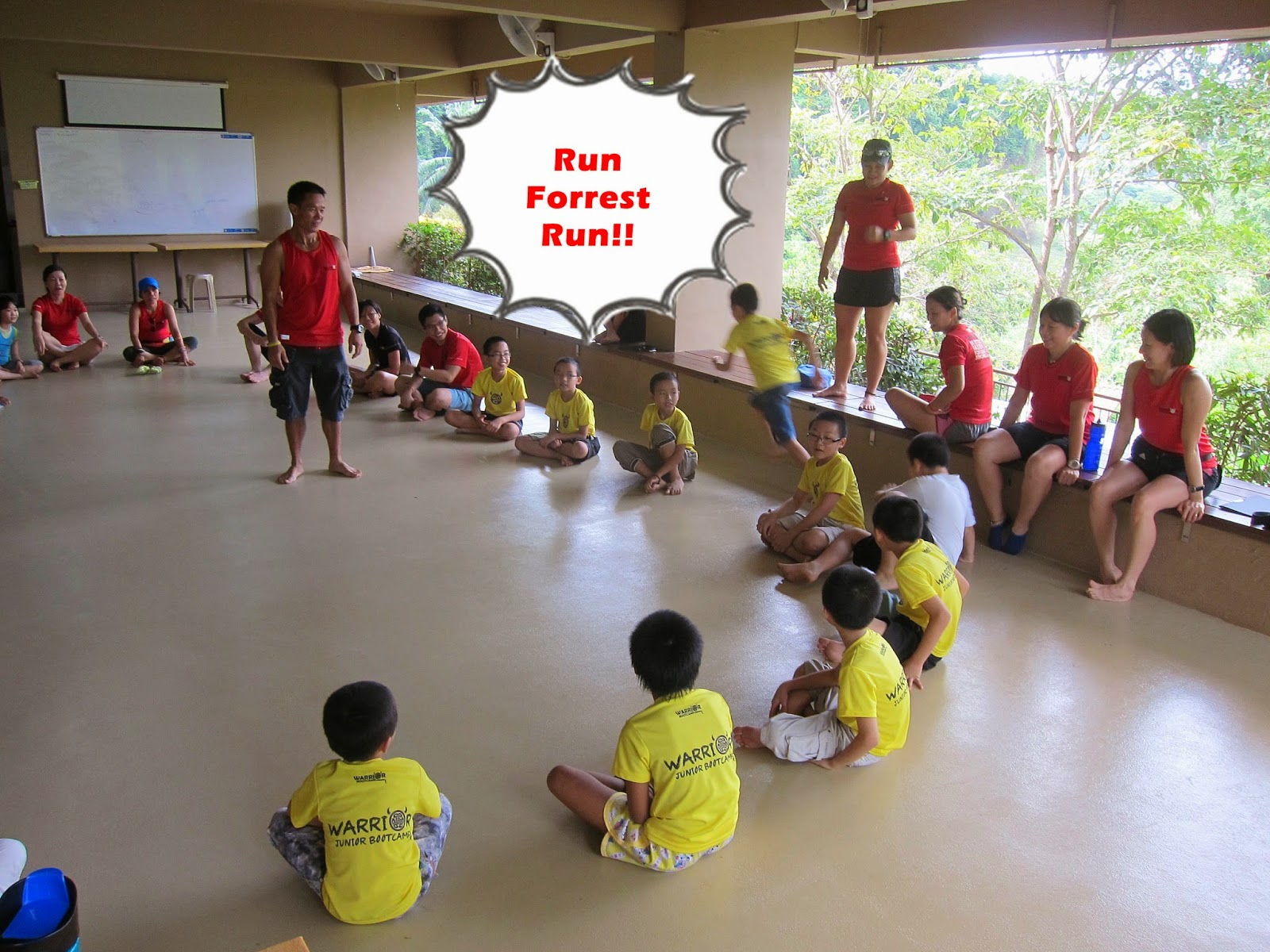 Punishment for the loser 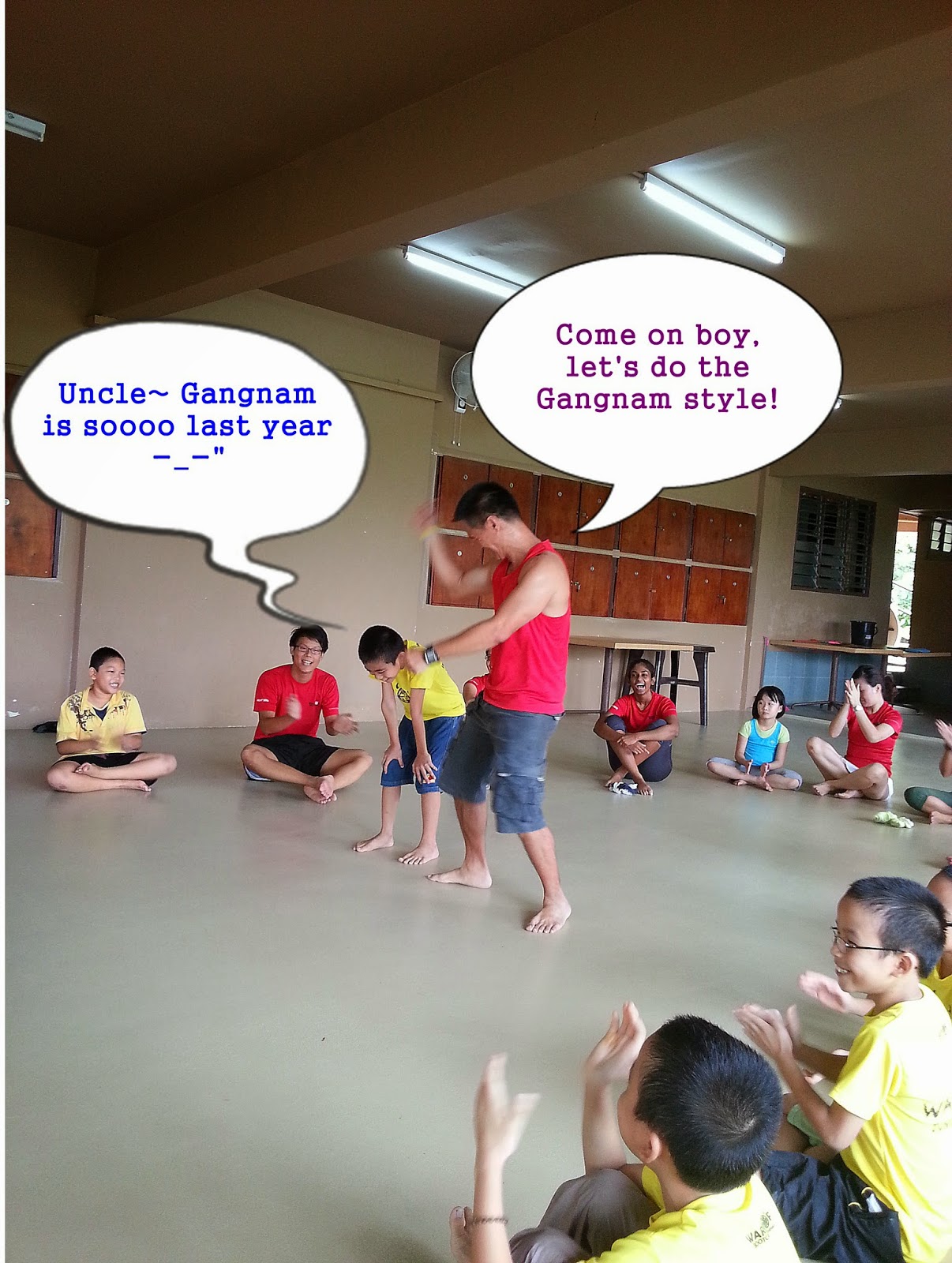 Of course the volunteers themselves, had to be punished too if they lost. The punishment were given by the kids and they sure had the losers doing different things from 40 ear pull squats to kung fu fighting to sit ups and push ups. 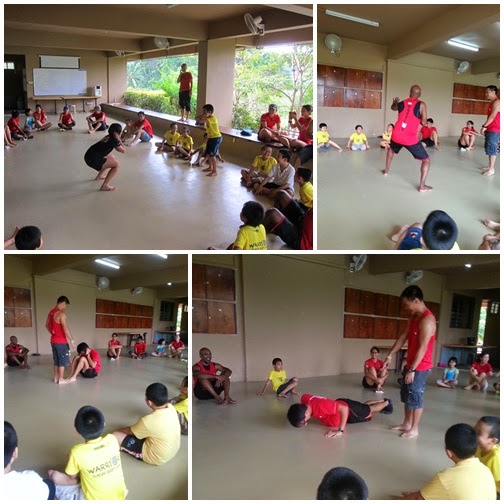 Next, we played Catch the Dragon’s tail. This is the ancient way of dividing people into groups. 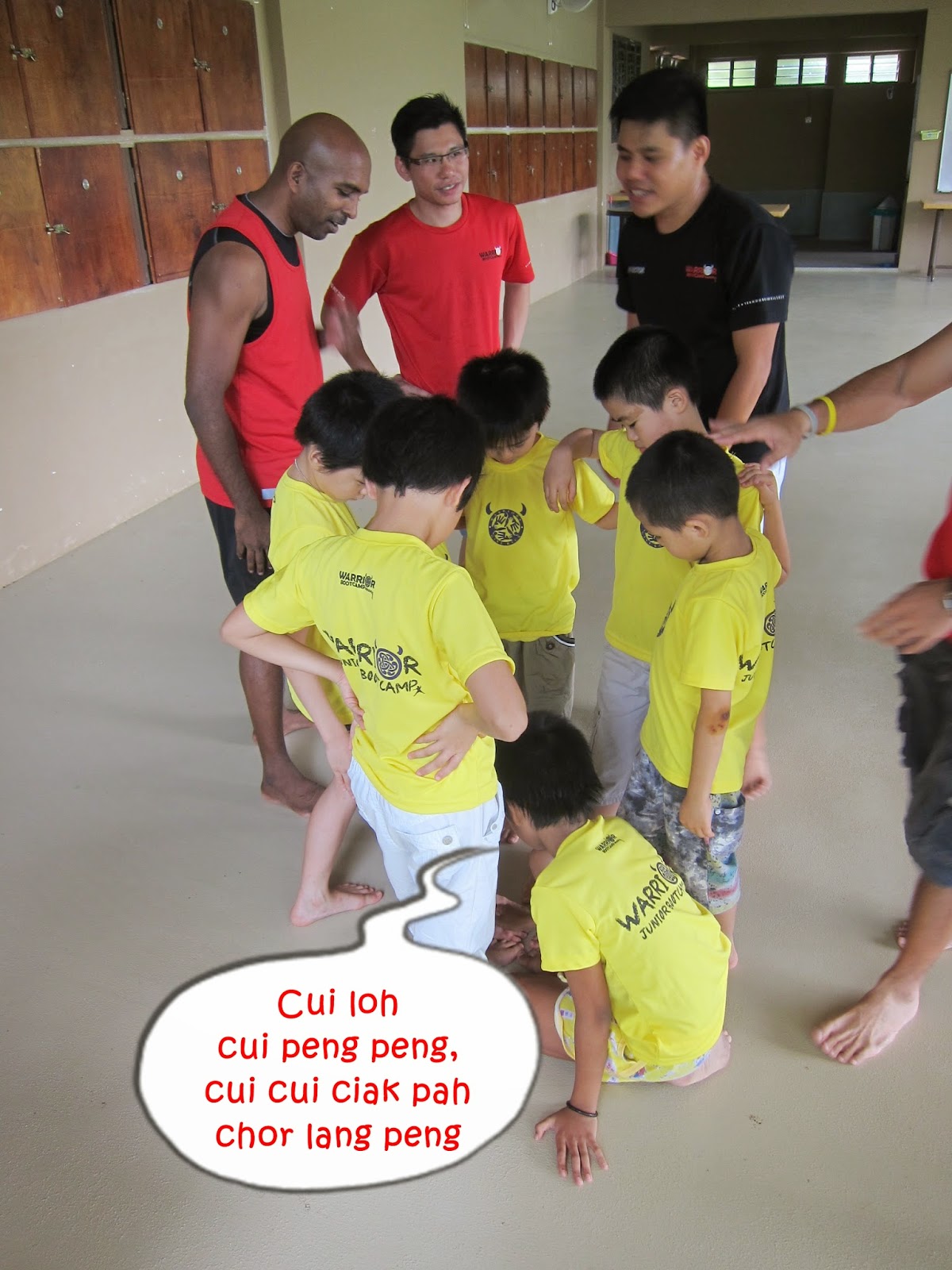 It was a helluva fun for all. The active kids had no problem following instructions, executing the game at the same time enjoying themselves. In fact, it looked so fun you wished you had their energy to keep going game after game. 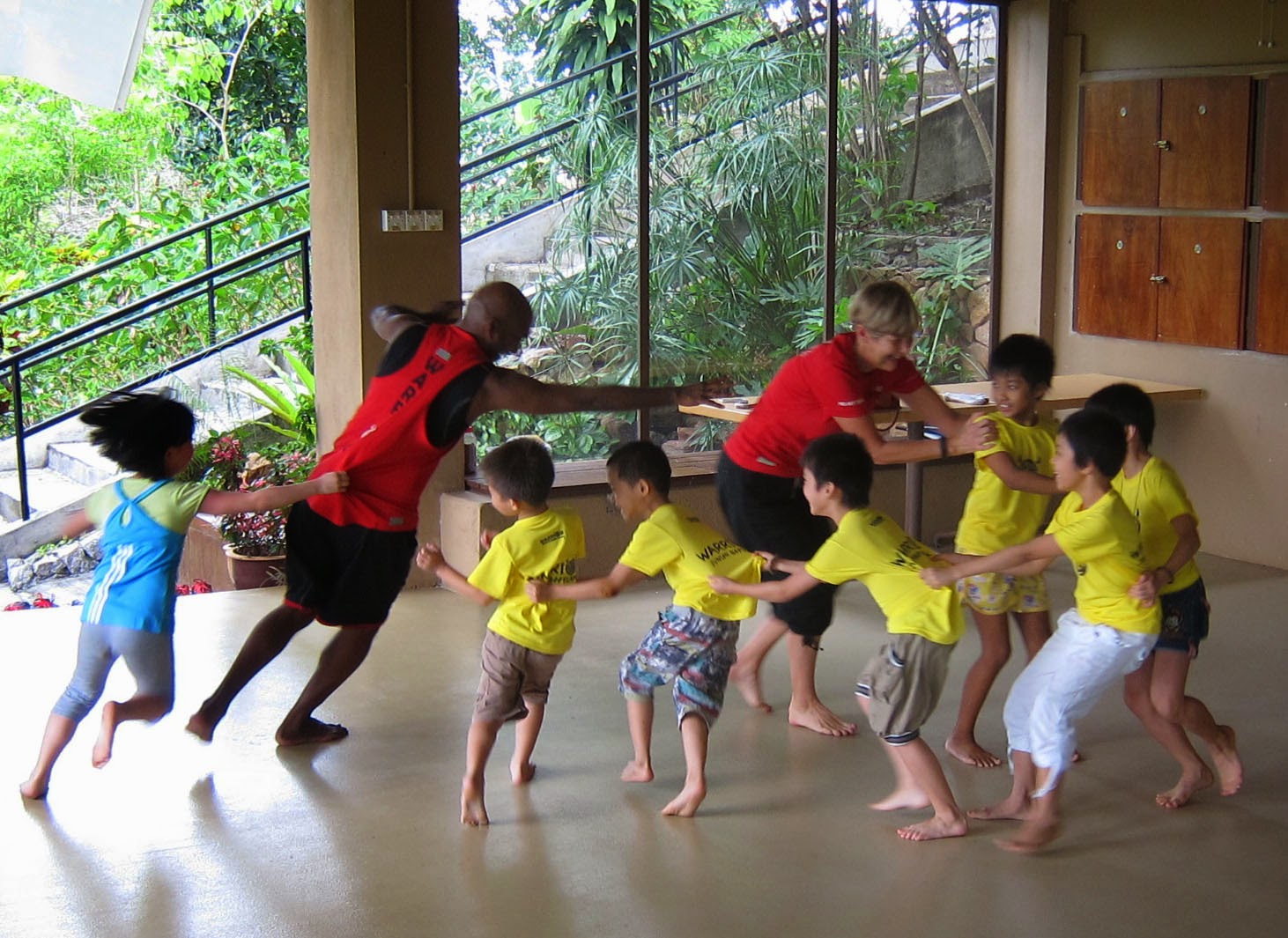 Next came the circuit. Luke and Ee Wey demonstrated the actions while the kids observed. 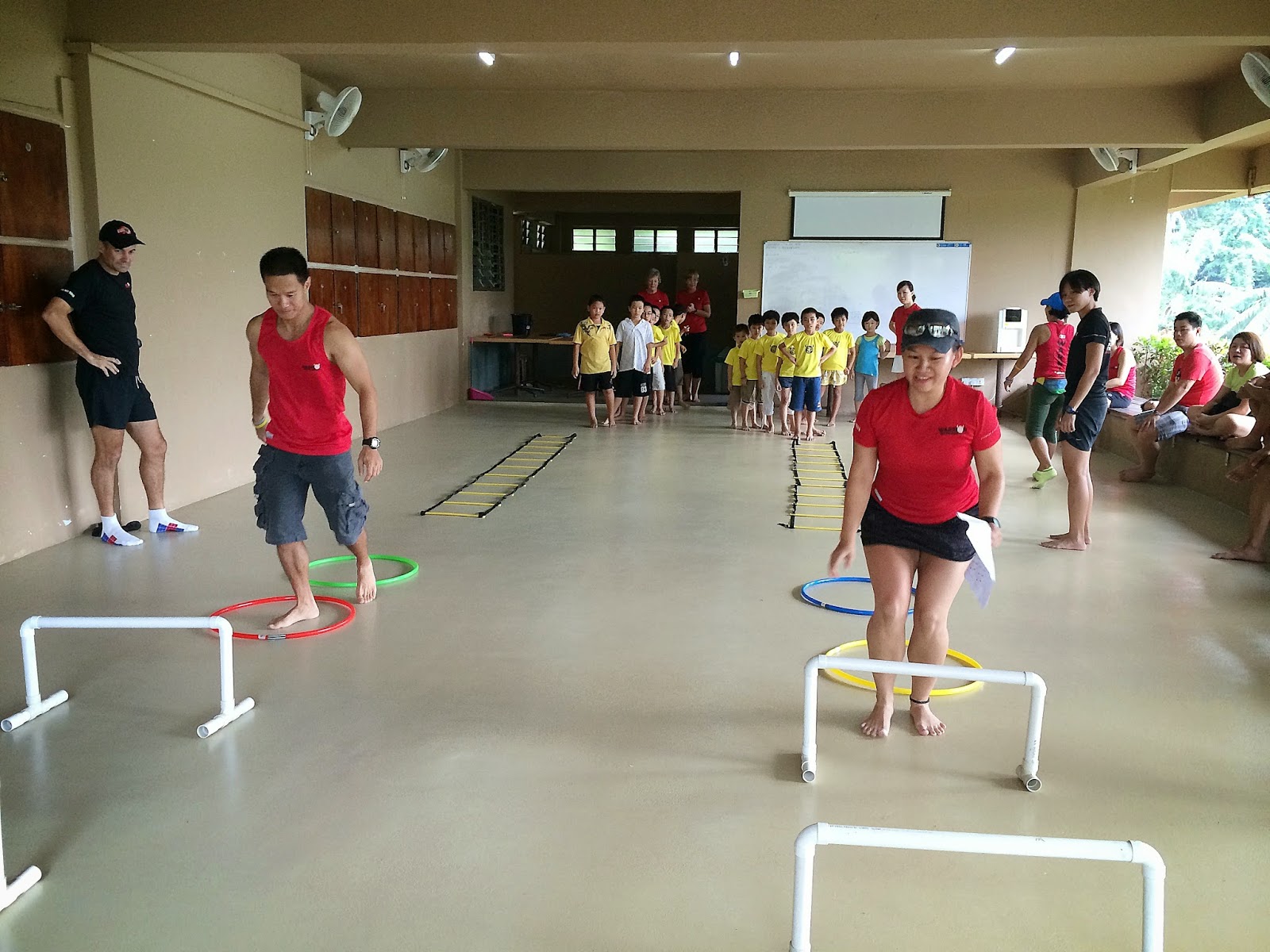 Things got quite competitive between the two teams for a while as team who collected the most items will be the winner. Team spirit was definitely seen in each respective teams as they encouraged and cheered each other throughout the game. Meanwhile, we, the adults had fun watching from the sideline and took great care to re-position the things back so the kids will not trip on them.

We proceeded to Hoopers. 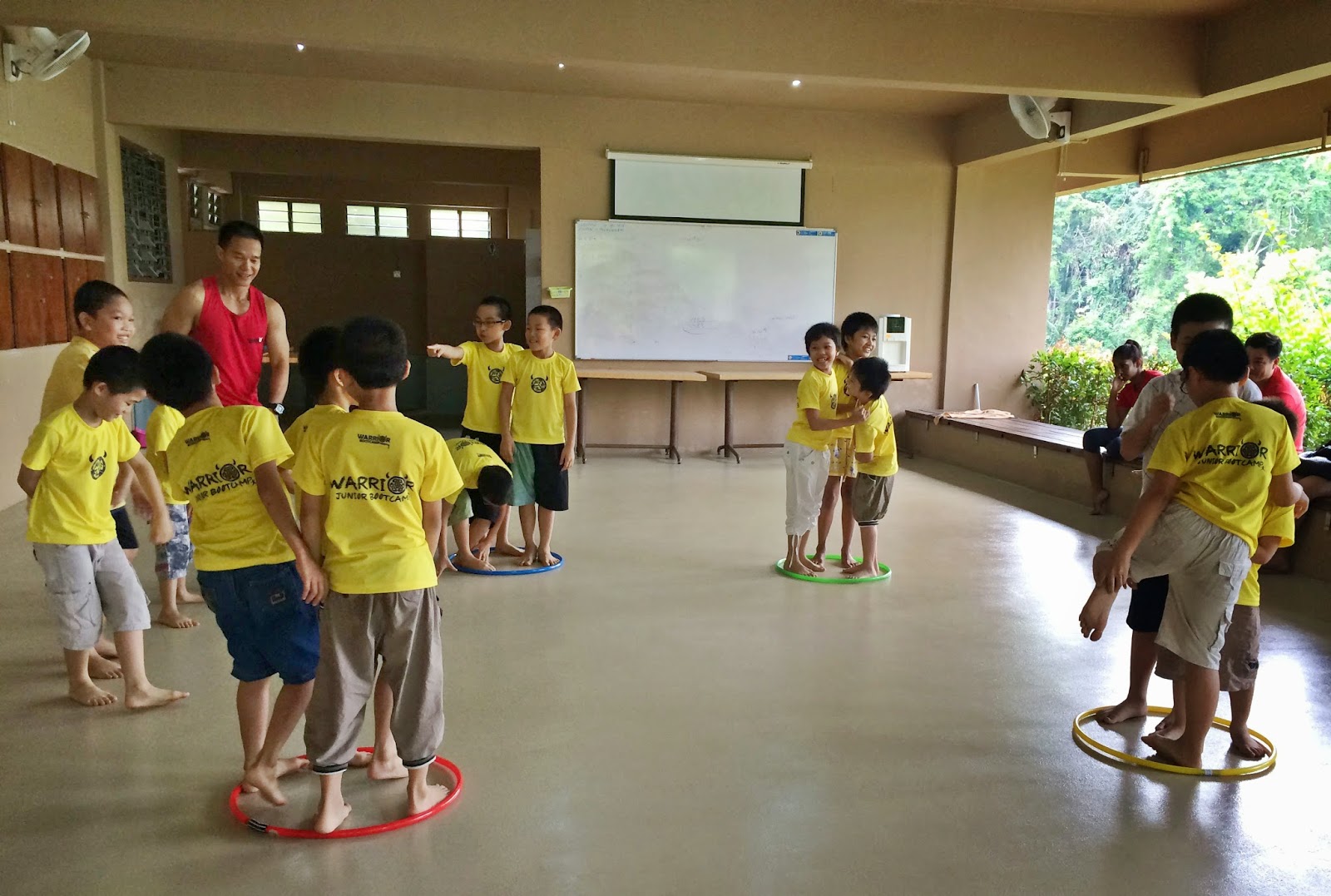 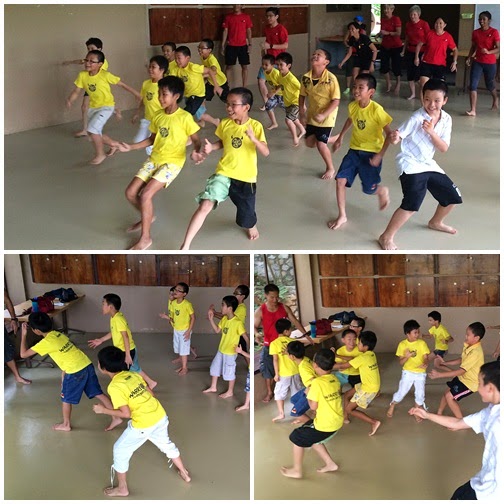 Basically the kids just turned the area into a circus of their own while the adults took a breather at the side. My, they were really full of energy and still were by dinner time. We had them gathered again and walked back to the house where dinner will be served.
The kids are vegetarians so we prepared a big sumptuous meal, probably enough to feed them for a day or two. There were also muffins baked with love by Penny and Popsicles prepared with healthy fruits and vegetables by Suan Choo and Kelvin. 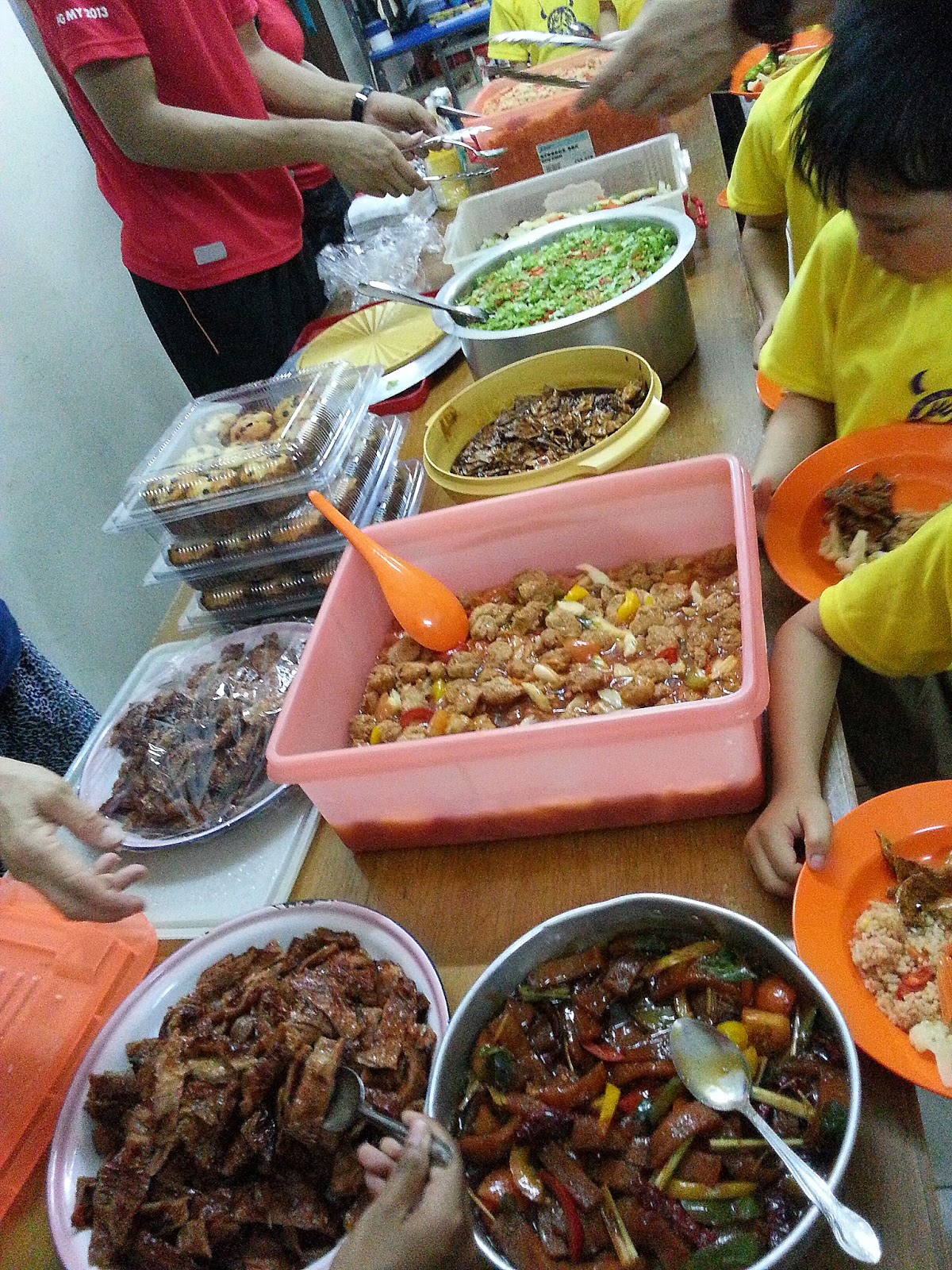 Serving them food. They’re so well behaved and good mannered that every single thing you did for them was greeted with a “Thank You”,” Excuse Me” if you were blocking their path. A short prayer was said and they addressed all of us as a form of courtesy before they started eating. 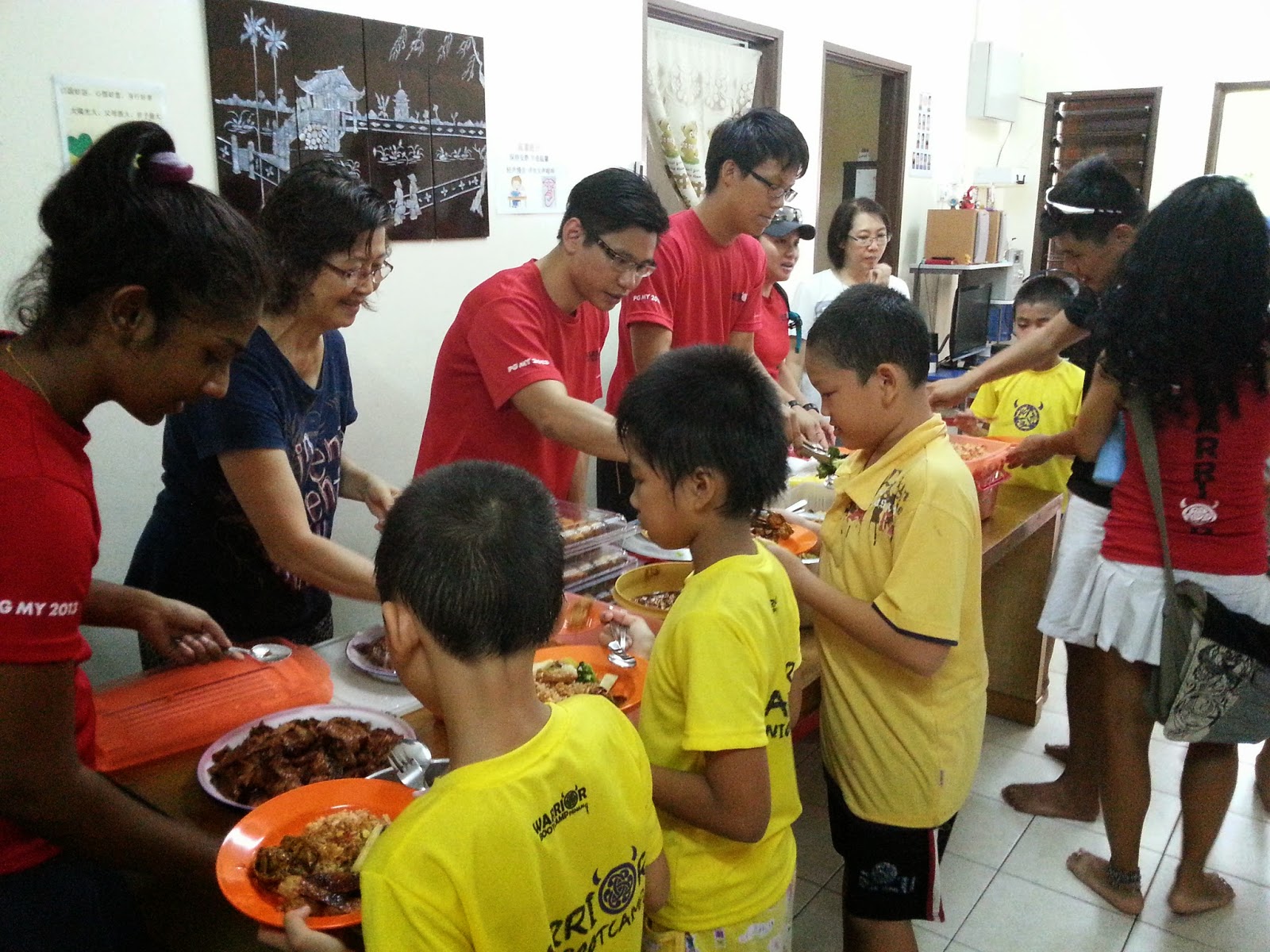 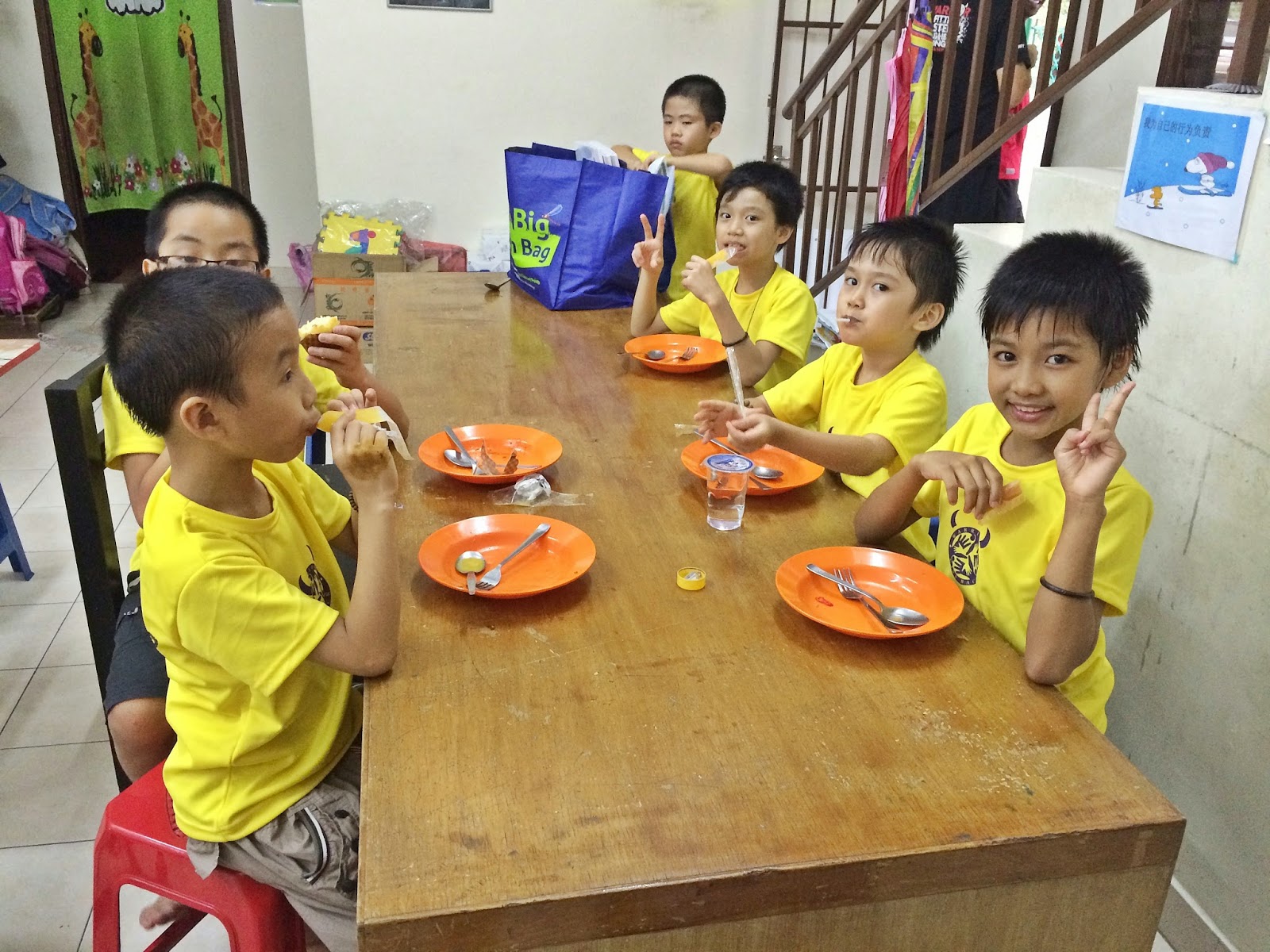 After dinner, the obedient kids helped to clean up by stacking up the chairs and placed them where they should be, wiped the table, and oh did I mention they washed their own plates too? 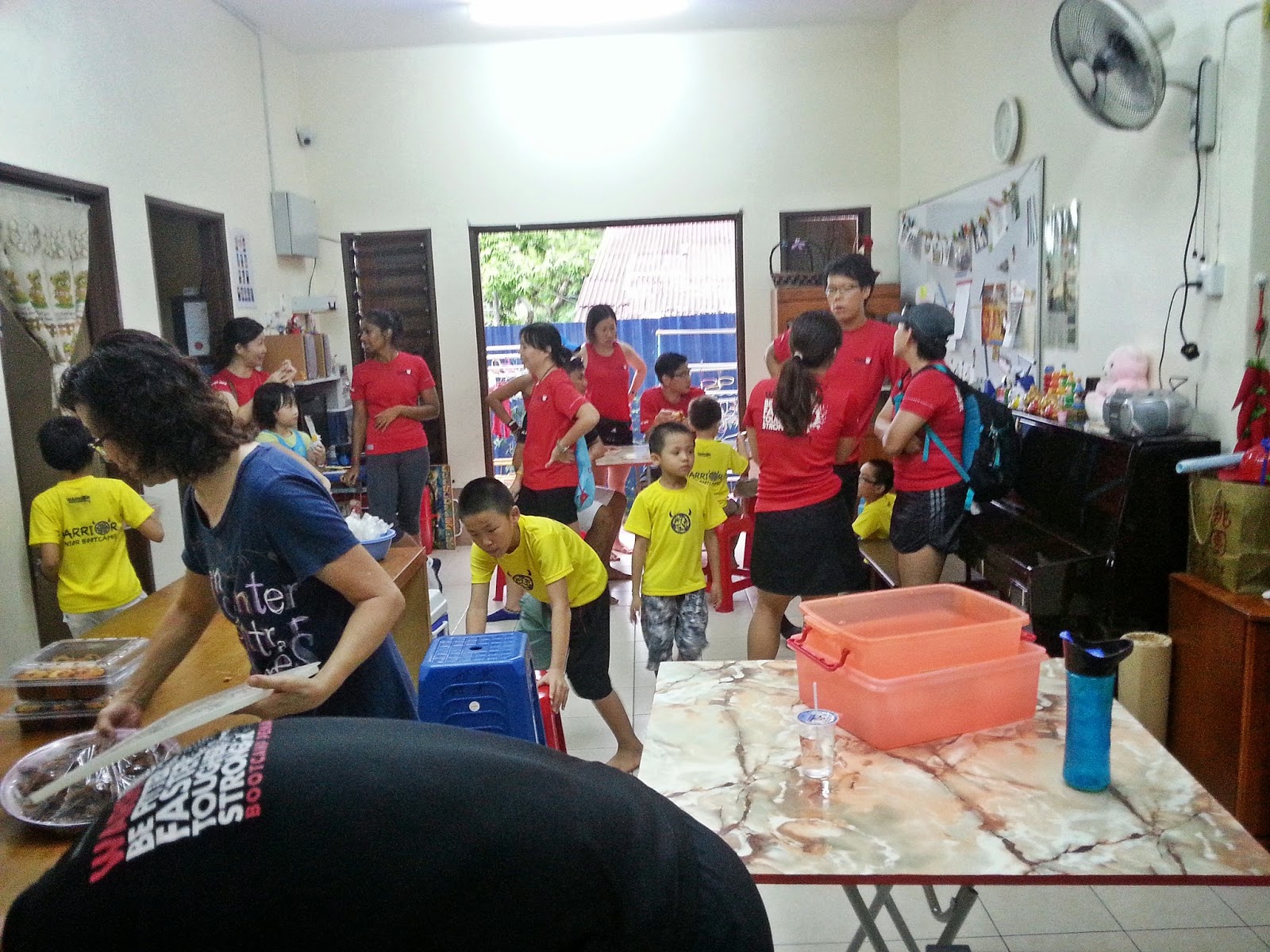 The older ones were assigned to wash bigger stuffs like the pots. 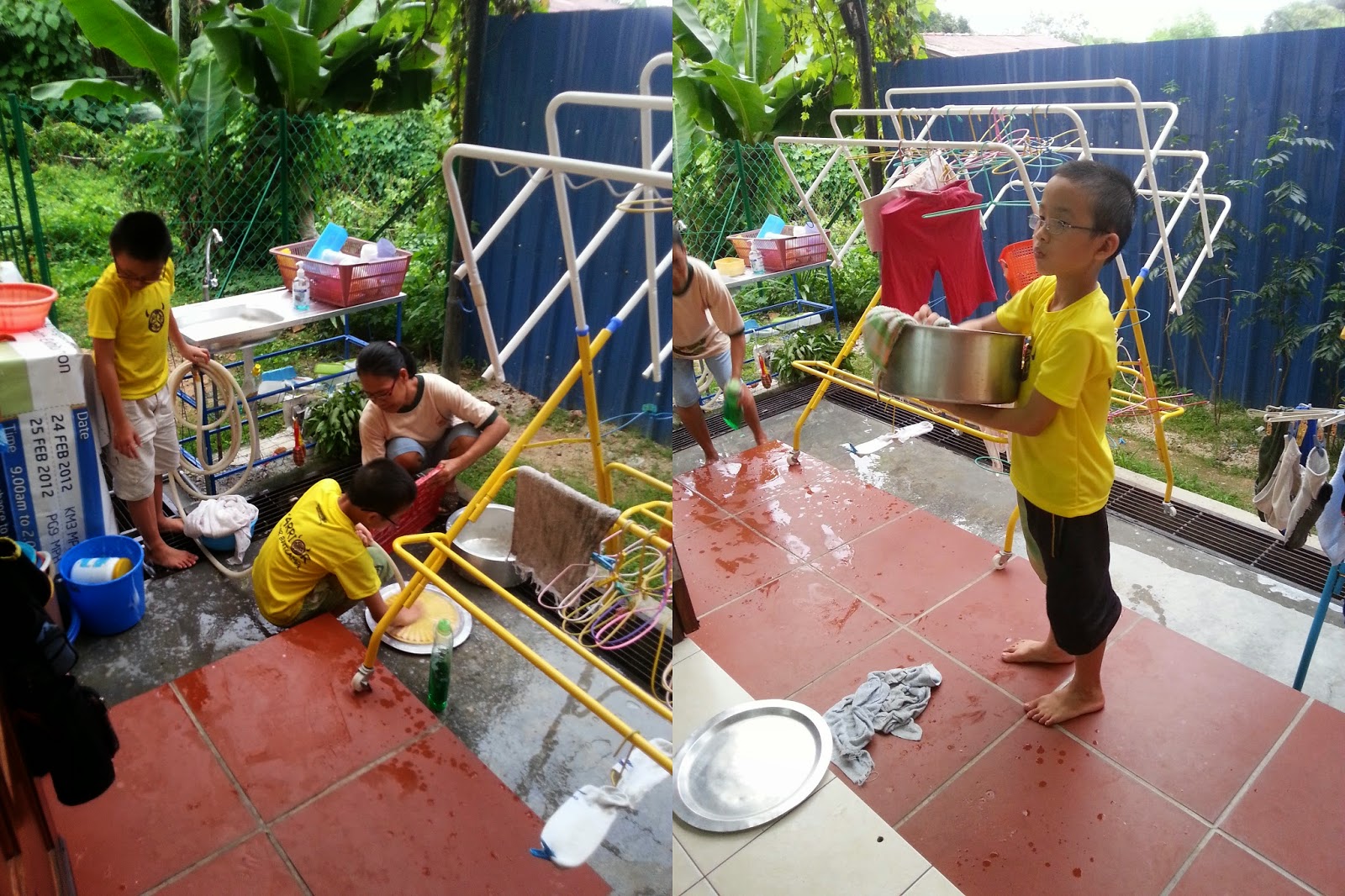 Last but not least, a small gift to all of them 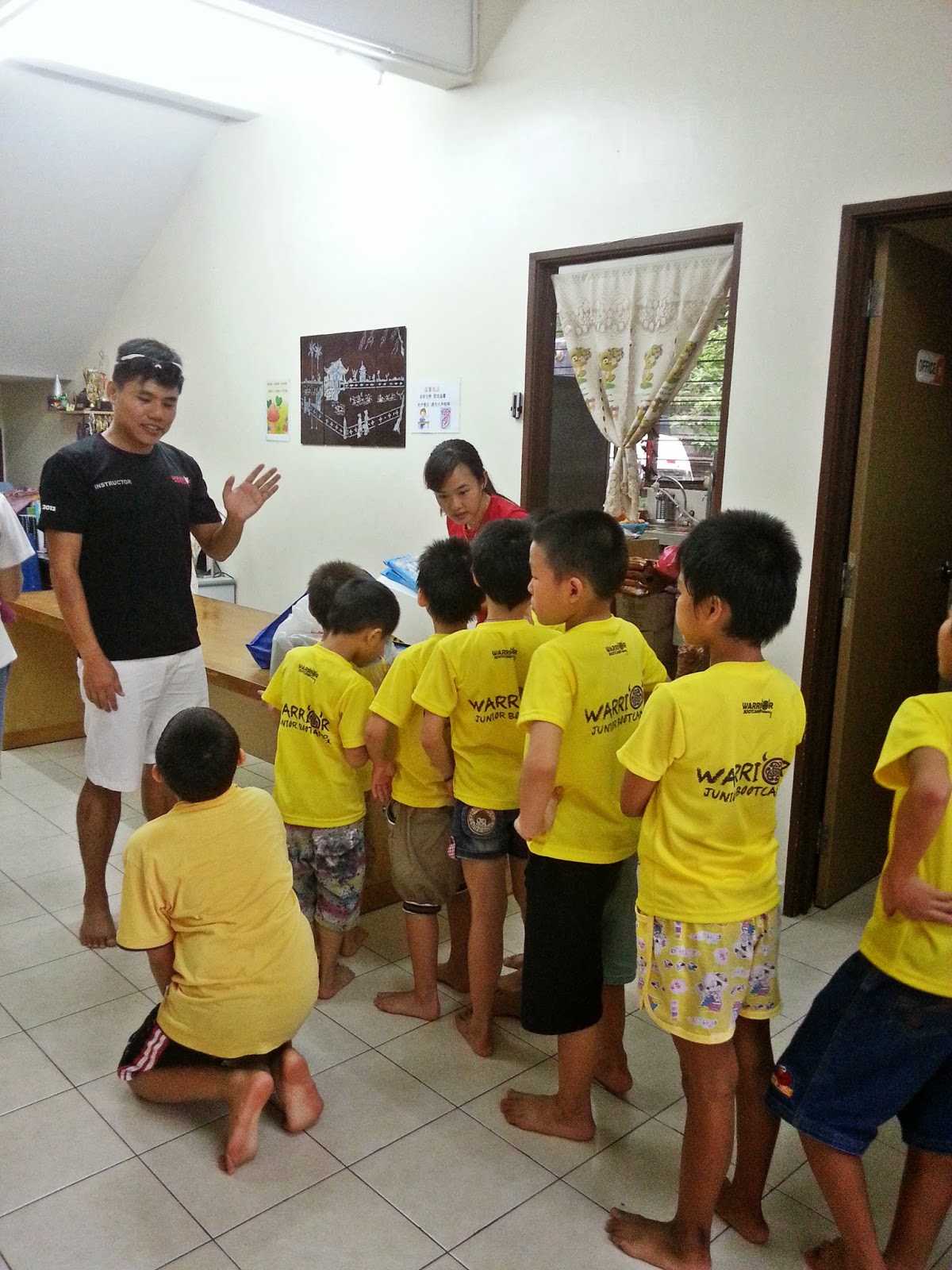 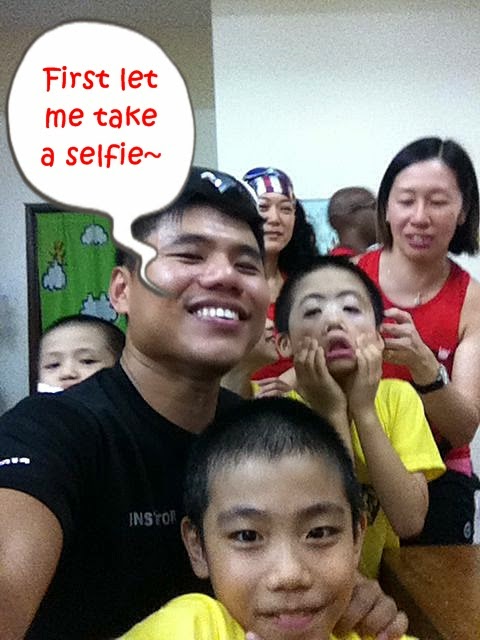 Stationery set and sand art pack. Other things like drawing block, marker pens, books and more stationery donated by the volunteers were passed to the helpers to give out for future use. Those were the items they were in need of. Should you plan to visit them, please call in advance to ask on the necessities they might need. 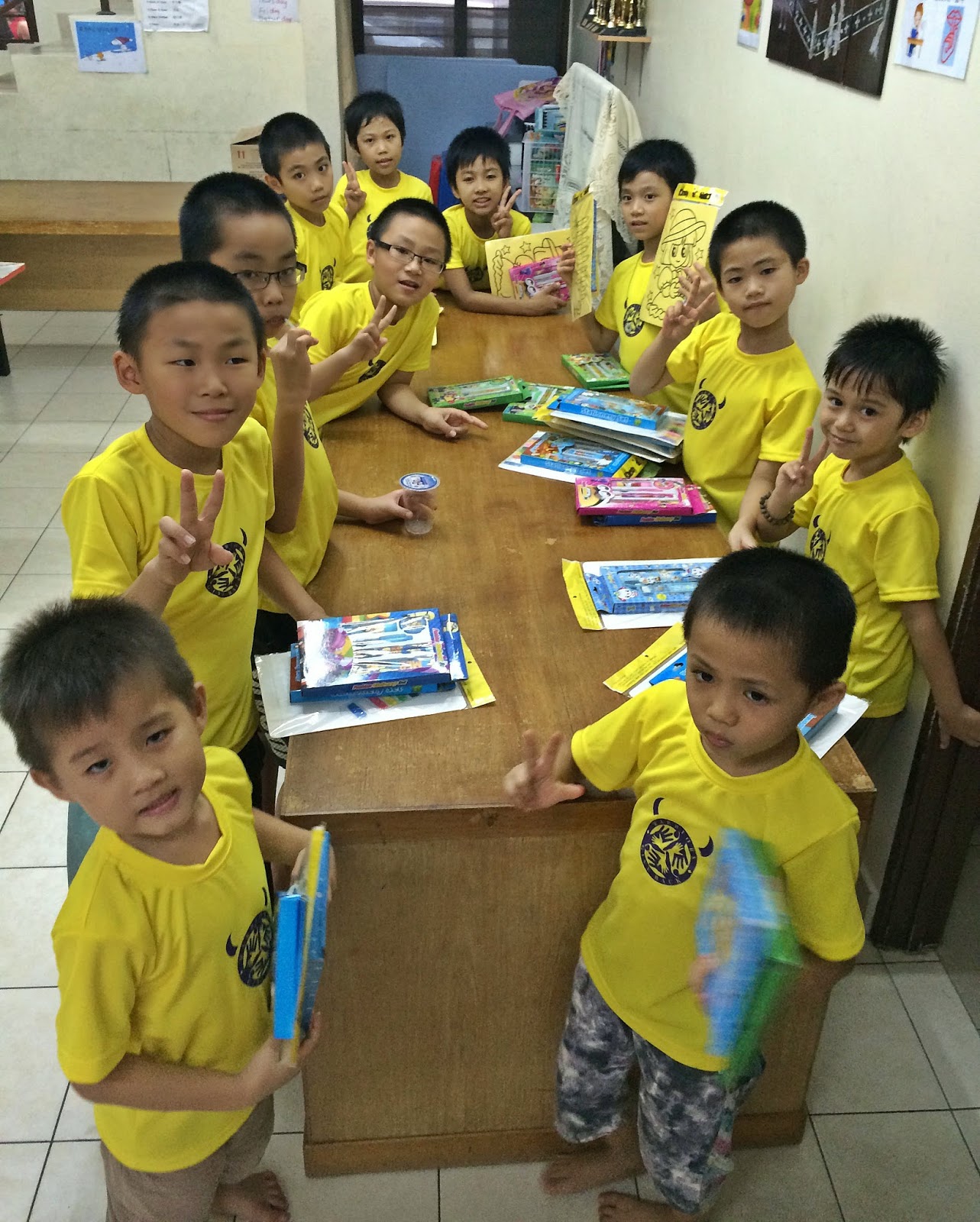 It was a real rewarding day for all of us. To be able to meet, greet, play, entertain and feed the kids. Their smiles and laughter were an added bonus which made all our effort worth it. Everyone had indeed come together and made this first mini project a success. Let’s hope that there’ll be more of this to come; different projects, different people in need, different location.. but all with the same cause, to give back to the community.
That’s all folks! 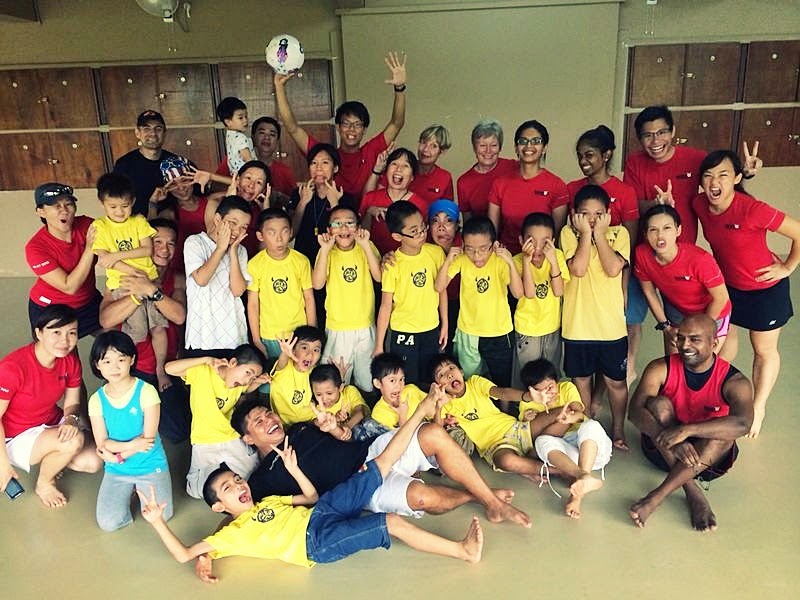 Last but not least, I’d like to end this post with a short video of the kids on teamwork 🙂